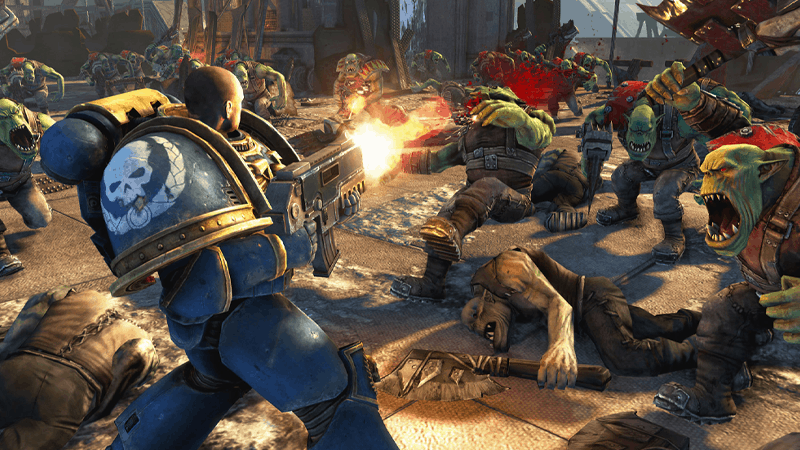 The Emperor Protects and there’s glory to be had, as ten years later, one of the best Warhammer-themed action games has been given a update called the Anniversary Edition. Free for everyone who owns it on Steam and the default selection if you intend to buy it new, Space Marine is finally seeing more love a decade later.

The Anniversary Edition doesn’t bring much new to the table, with an included soundtrack, artbooks, PDFs and more importantly, a ringtone! Yes! Fumble around with iTunes and hope to god it works on your phone. It also includes all of the released DLC for the multiplayer mode:

Set in the grotesque world of Warhammer 40K, you’re an Ultramarine, sent in to clear a facility of the invading Orks. Things go south and you’re thrust into something a little deeper than usual.

Space Marine was developed by Relic, previous video game custodian of the Warhammer franchise and was a complete deviation from their usual strategy fair and – in my “expert” opinion – should have been what they continued to do.

Warhammer 40K: Space Marine is fantastic*. It’s one of the most bombastic, brutal video games with these hordes of orks coming towards you, all screaming at the top of their Cockney tones, as you lay waste to them with chainsaws, axes and trusty assault rifle. It was a peculiar oddity back in 2011 when it was released, as it was a third-person shooter but did not feature a cover system and generally forced you forward in an attempt to keep the chaos flowing.

Killing orks with special finisher moves replenished your health, so you were constantly on the move to find your next Boyz to squash.

These updates usually indicate that a studio or publisher is actively seeking interest in the game for potential sequels, so that can only mean good news for those of us who want to see the resolution to our squad of Ultra Marines. Personally, I’d love to see a sequel to see what Sega and Relic could do with a bigger, bolder game. Maybe even give us a chance to play as Orks as well…