One of WhatsApp’s latest privacy-related features is disappearing messages, which is already available on Android and it’s coming really soon for iOS users as well. The feature is reportedly being tested on a beta version of the app but it surely won’t take long before it hits the final version of IOS. 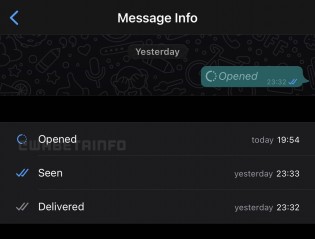 Screenshots from the new beta version of the app

The disappearing messages isn’t about texts only. There’s also disappearing media, which goes away as soon as the recipient opens it. It’s like one of those disappearing videos and photos, which you can send in Instagram’s chat. The feature is called “view once” and has to be available to both parties. The disappearing text messages, on the other hand, take 7 days before they disappear.

There’s a dedicated timer in the caption input field when sending media and the sender receives a notification once the recipient has viewed the photo/video message. However, there’s nothing stopping the recipient from taking a screenshot before the message disappears.