Xiaomi is preparing to announce the fifth generation of the Mi Pad, which is due to be presented in August. Through a series of rumors and leaks about the Xiaomi Mi Pad 5, a “live” photo breaks through, which, according to its author, depicts the Xiaomi Mi Pad 5.

Alas, as often happens, the quality of the photo leaves much to be desired. In front of us is a tablet, which is generally similar to those renders of the Xiaomi Mi Pad 5 that we saw earlier. They are not inclined to conclude that this is a ready-made and workable tablet. It looks more like a mock-up or we were only shown the back panel of the device. This conclusion made me draw the main camera unit, on which the image sensor and the flash are not visible. It feels like a black plug instead of a camera.

We are waiting for the premiere of the Xiaomi Mi Pad 5 in the first half of August and, presumably, it will take place on August 11 simultaneously with the release of Xiaomi Mi Mix 4 and the Xiaomi Mi CC 11 series. It is known that in China the tablet will be sold in two versions of the hardware platform with Snapdargon 870 and Snapdragon 860, but only the younger variant will reach the global market. It is expected that all modifications of the tablet will receive an IPS-screen with a resolution of 2560×1600 pixels and a refresh rate of 120 Hz, a 12-megapixel camera and Wi-Fi support. 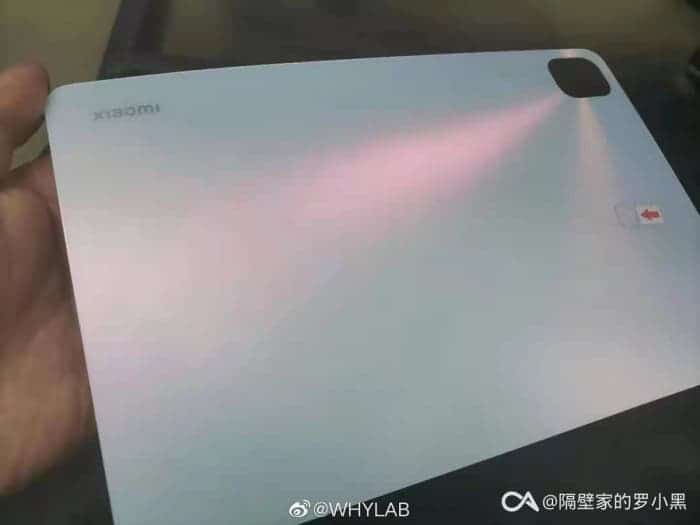 I think that no one doubts that Xiaomi will continue to increase the lineup of its smartphones; because the goal is to increase its share in the global market; and get the maximum benefit from the fall of Huawei. Already next month, we will have the announcement of Xiaomi Mi Mix 4; Xiaomi CC 11 and Xiaomi CC 11 Pro. This premiere season will not end, and the company is preparing for the release of two other smartphones with the codenames Lisa and Vili.

The last of the named models was spotted on the website of the US Federal Communications Commission (FCC). According to rumors, this will be a flagship device with a Snapdragon 888 chip; which is created using a 5-nanometer process technology, has 8 cores with a peak frequency of 2.84 GHz. The smartphone is also credited with a 120 Hz AMOLED display with a resolution of 2400×1080 pixels.

For the smartphone codenamed Lisa, they chose the Snapdragon 778G processor; which is armed with eight computing cores with a peak frequency of 2.4 GHz. The screen here should be 90 Hz and on the back side they will offer a set of three sensors; where the main 64 MP Samsung ISOCELL GW3, there will be a wide-angle sensor and a sensor for macro photography.