We’ve been hearing about the Mi Pad 5 for a few months now, and today the company finally confirmed that it will unveil the Mi Pad 5 tablet on August 10.

Xiaomi hasn’t revealed much about the Mi Pad 5 so far. However, the image it shared on Weibo confirms the Mi Pad 5 will come with stylus support, but whether or not the stylus will be bundled with the slate remains unclear.

The image also tells us that the Mi Pad 5 will have flat frames, and you can see an antenna line on one of its sides, suggesting metal build and LTE/5G connectivity. 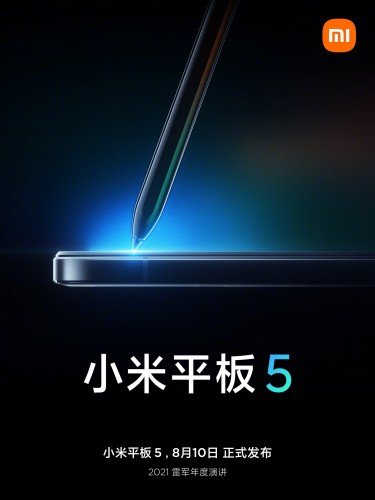 Leaked images revealed the Mi Pad 5 will feature a Mi 11-like camera island on the rear, and there will also be a keyboard cover case with a holster for the stylus.

Xiaomi will also introduce the Mi Mix 4 on August 10, and we expect the Chinese phone maker to confirm a few features of the Mi Mix 4 and Mi Pad 5 in the lead-up to the official unveiling.

Curved Camera Sensor: New Sony Patent Shows Where Tech Could Go ... If Business Will Let It