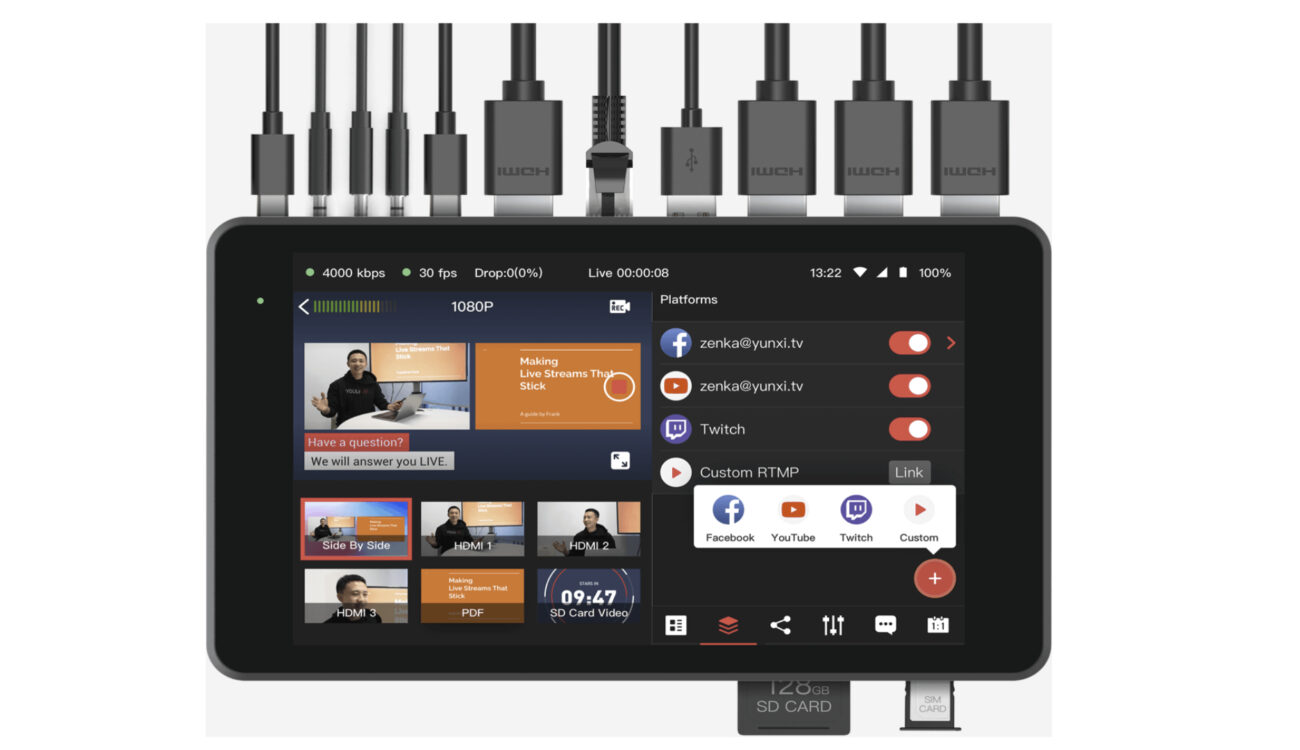 YoloLiv has launched the Yolobox Pro, the bigger and more functional version of the original Yolobox which made a name for itself for being a self-contained live streaming solution including a 7-inch monitor with a touchscreen.

The basic action is to import from various sources, switch those inputs live or recorded as live and then stream out to pre-defined online services like YouTube, Twitch, etc. You can add graphic overlays and rolling captions. There’s a scoreboard feature and live chat options. So, what’s new with the upgraded Yolobox Pro?

Yolobox Pro is the same except there’s more of everything and that includes a better Qualcomm processor to improve the streaming signal. That extra power promises more services in the future, but more about that later.

The difference between Yolobox and Yolobox Pro

Firstly the screen is bigger, an 8–inch LCD from the original’s 7-inch. The unit itself is heavier and has a fan at the bottom; maybe the result of the Qualcomm processor from the 625 to the claimed twice as powerful 660 chip. The screen is also brighter with a Nit value of 400 from the original 350 – a major selling point of the original Yolobox was its appeal to the road warrior streamer needing a screen for all weathers.

Going through the feature set, the new unit has more camera HDMI inputs, well one more. Of course, an HDMI input doesn’t have to be a camera, it can be a computer or even another switcher for more inputs. Moving along the rear of the new unit there is a new USB–C port which makes three of them, two can be inputs as they’re fully featured. The last is used for charging.

There is also a mic-in, a line-in, and a headphone-out. Allowing you more input choices with the headphone output there to help if you’re only the switcher in a particular scenario and need to listen to the mix.

Has the operation changed?

YoloLiv haven’t sought to re-invent the wheel with this new unit. The basic operation is the same, just better. Perhaps a Mark II badge would have been better but you can see them selling the original box in parallel. You still have a great form factor for streaming remotely or on the move. You can insert overlays and pre-set your destinations very quickly. Other switchers will make you add a computer and a screen, and are bulkier. You might then want to use a web app like Restream to direct your content. You don’t with Yolobox and Yolobox Pro.

Should you upgrade to Pro?

If you need more inputs then yes, invest in the new box. Perhaps the really clever thing to do is use your original Yolobox to remotely stream to your new Pro box (we haven’t tried this yet but theoretically it’s possible). But because the operation of both boxes is so similar you may have enough power with your original box for now. There’s about a $400 difference between the two (YoloLiv recently dropped the original’s price) which is sizeable if you’re still building your streaming business but it also may push you towards the new model.

With the new processor, YoloLiv has teased the market with some previews of what may be possible in future updates. Included are Chroma Key; editing fonts and colors; enhanced audio interface; bitrate control and adjustment and various graphic templates. We will be able to review these items when they appear.

Please let us know if you already have Yolobox or if you’re planning on buying the new Pro. How do these boxes rate against the class-leading switchers from Blackmagic Design?