ZTE was once banned by the US government and almost had to cease its operations in the smartphone business. However, the company found an agreement with Trump’s administration and after a few changes in its leadership managed to return to the market and resume the use of US-related technologies. We must say that the company had a great comeback. It was one of the first Chinese firms to deliver a 5G smartphone with global bands, and last year made its name as the first smartphone maker to bring a commercially available smartphone with the under-display selfie camera. Now, the company is preparing the second iteration of this technology through the ZTE Axon 30 5G.

The company has been teasing a second generation of its under-display camera since February. The company has even revealed some demos and prototypes of this technology. Earlier this year, the company unveiled the ZTE Axon 30 Pro and 30 Ultra and the technology wasn’t present in any of these handsets. The reason is that ZTE is holding this technology for the ZTE Axon 20 5G successor, the Axon 30 5G. Today, we have an official confirmation that the ZTE Axon 30 5G is coming soon with this second-gen UD camera. The company didn’t say when exactly, but unofficial sources are pointing to a July 22 announcement. Interestingly, ZTE and Nubia president, Ni Fei revealed there’s an all-new smartphone coming this month. 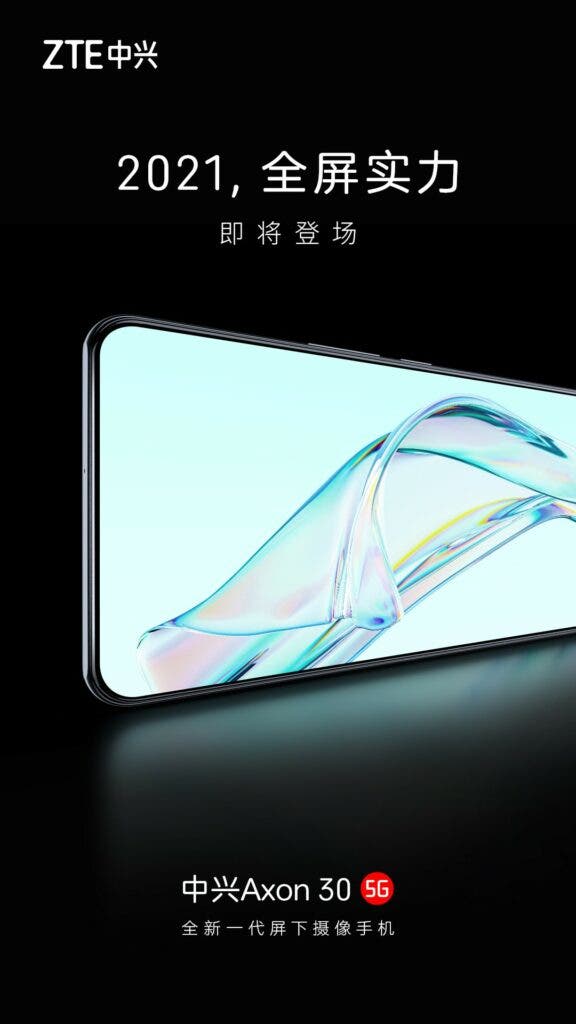 ZTE Axon 30 to pack a Visionox display with improved technology

Apparently, Visionox will be an important player for ZTE with the ZTE Axon 30 5G. The two companies have reportedly had a breakthrough with a new pixel arrangement that enables better clarity and better image quality. These were the Chinese firm’s top priorities when creating the second generation of its smartphone. According to info from ZTE from February, the pixel density of the are above the camera will double from 200ppi to 400 PPI. It will make the camera’s portion of the display less noticeable. Moreover, the refresh rate of the screen will go up from 90 Hz to 120 Hz.

Unfortunately, we still don’t know much about the hardware inside the ZTE Axon 30 5G. While its siblings came with Snapdragon 888, we don’t know if that will be the case of the vanilla smartphone. It can stick with a Snapdragon 870 SoC or even a Snapdragon 780G. After all, the original Axon 20 wasn’t a flagship in terms of performance. ZTE will repeat this strategy to not make the Axon 30 crazily expensive. The device may come with at least one 64MP camera and a huge battery with fast-charging technology.

If it is indeed coming in July, we expect more details to emerge soon.